Focused on mission and service.

On the 16th of October 1897 five sisters came from New Zealand at the request of the Bishop of Perth to commence a school.

In the early 1920’s a wooden hall in Tamar Street was hired for five shillings a week and on April 13th 1923, on Palm Sunday, Father Kearin celebrated the First Mass in the Hall.

In 1923, Sisters, Mary Lawrence and Mary Modwena from the congregation of Our Lady of the Missions and Mrs Searle taught the first lessons in Palmyra in the Tamar Street hall. They travelled from East Fremantle by tram along Canning Road to Carrington Street and then walked to Tamar Street. The fare was one shilling a day for a two-way ticket.

When the St Gerard’s Hall was completed in 1925 it was used as a school.

It had to be furnished and at that time new motorcars arrived in huge motor cases that could be bought for ten shillings each. Ten cases were purchased and working bees were organised on Saturday mornings and at night.

Blackboards and easels were made out of these cases. School desks were too expensive so moulded iron frameworks were bought and with timber provided by Bunnings, school desks were assembled.

School fees were six pence per child per week, but financial circumstances were taken into consideration. Government aid was available for pads, art paper, brooms and dusters only. 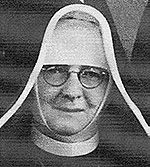 In 1950 the Sisters purchased the presbytery in Hammad Street and took up residence in August 1952 when the presbytery facing Foss Street was completed.

In 1952-53 a hall was built at the rear of St. Gerard’s Hall; a low cost construction that contained a projectionist’s room and toilets.

In 1959 extensions to the school saw the old toilets demolished and more classrooms and a new toilet block built.

In 1971 Our Lady of Fatima School was made to serve East Fremantle as well as the Palmyra Parish.

In 1974 a hall was built at the Harris Street end of the school grounds.

In 1974 Sister M. Camillus retired as Head Mistress of Our Lady of Fatima School.

Mr. E Durham was appointed Deputy Principal, initiating transfer of authority for the first time to a lay headmaster.

At the beginning of 1976, Mr Tom Roberts was appointed principal of Our Lady of Fatima School. 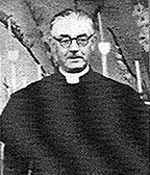 The new principal immediately planned the upgrade of the school. Work on three new classrooms and administration began. A second hand bus was purchased by the school and was used to transport children to school from Bicton, East Fremantle, Melville and Willagee areas.

The new classrooms were blessed and opened by Bishop Quinn on the 24th of April 1977.

Upgrades to the Year 1 and 2 classrooms were also completed.

In 1979 work on the building of two new classrooms, toilet block and garage were commenced. This involved the demolition of the parish shrine.

In 1982 a Pre-Primary was opened in the old Convent Building (the original presbytery) in Hammad Street. Parents carried out many of the alterations.

Mr Tom Roberts resigned as Principal at the end of 1983 and Mr Tony Giglia was appointed Principal.

Mr Giglia saw the demolition of the old St. Gerard’s Hall and the building of the new church on the same site.

After extensive consultation to determine the future needs of the school, the oval, which was located on the corner of Hammad and Foss Streets, become the tennis and netball courts as well as the church parking area. 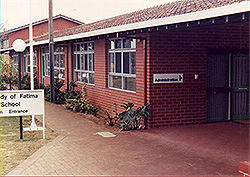 The building in Hammad Street was demolished to make way for the new grassed playing area. The remaining original building was also demolished.

Mr Giglia completed his term as principal in 1989.

In 1991 Sister Veronica moved to Scotland and ended the work done by the congregation of Our Lady Of The Missions.

In 1993 an application for funding was made to enhance the hall and canteen, the construction of a new school entrance and office and improvements to the staff room. The application included the resurfacing of the car park/tennis courts and some grounds improvements. 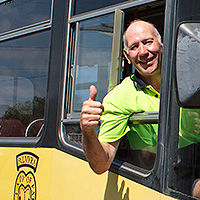 The stained glass panels, which had originally been part of the shrine, were included as a special feature on the main entrance door.

In 1998 a further application for funding was made to provide space for the Kindergarten students.

Access to the library was constructed and the junior playground was improved to cater for the additional student use.

In 1999 the new buildings were officially blessed and opened.

The school board embarked on an extensive maintenance programmed whereby classrooms were upgraded along with external environs.

In 2011, the Building the Education Revolution program developed by the Rudd Government as a response to the 2007-2010 global financial crisis allowed the school to embark on a building program to build a 21st century library. Renovations and refurbishment was undertaken throughout the school.

In 2013 the inaugural Three Year Old Kindy Program ran with a class of 20 students providing students with two half day sessions per week.

Mr David Barns was the interim principal for second term 2013.

Our Lady of Fatima School provides a Catholic education for the children of Palmyra and East Fremantle Parishes.

The school is now a modern, single stream school catering for 250 children from Pre-Kindergarten to Year Six.

© Copyright 2020 Our Lady of Fatima - All Rights Reserved. Website by GoGlobal